The mission of the Greater Elmira Tennis Association (GETA) is to promote tennis as a means of healthful recreation, positive social interactions with others and a lifetime of physical fitness for all age groups.

GETA does this by providing opportunities for adults and youth to enjoy the sport and develop their skills and fitness. During warmer weather months, on outdoor courts in the community, GETA organizes tournaments, doubles leagues and singles ladders. During colder months, GETA manages Elmira College’s 4 dome-covered indoor courts.

GETA also allows independent tennis instructors who provide lessons or camps to include information on our website for the convenience of the public.

GETA sponsors USTA Junior Team Tennis, a coed, competitive format for juniors ages 8-18. Juniors are recruited typically from the Ithaca, Corning and Elmira (ICE) communities. Practices and matches are held at the Elmira College Indoor Dome and the Reis Tennis Center in Ithaca.

If you have any questions about our organization, or if you’d like to know how you can join or help our mission, email us at  getatennis4all@gmail.com.

In 1997, The Greater Elmira Tennis Association was formed as a non-profit organization by a group of tennis playing enthusiasts who wanted to see tennis grow and thrive in our region. After the Elmira City League stopped, Pat Smith, MaryEllen Halm, Dorothy Marshall, Rich Rollins, Cindy Hutchinson, Ellen Sheehan, Barb Preucil, Bob Jungquist and Phil Levkanich met to discuss forming a USTA supported Community Tennis Association. With long hours invested and much thoughtful planning, GETA began. Its mission started with promoting youth tennis in inner city Elmira and assuming responsibility to run a summer doubles league that had previously been run by others. Over time, GETA added Tournaments and lessons in the summer months and ran Friday Night Mixers at the Twin Tier Racquet Club.

Through a partnership with the Town of Elmira, GETA purchased windscreens for its 6 courts and ran two summer tournaments for youth and adults that brought competitors from Ithaca, Syracuse, Binghamton and norther Pennsylvania to the competition.

When the only indoor tennis facility in our area was up for sale, GETA board members and two key volunteers donated hundreds of hours attempting to continue the availability of indoor tennis. While GETA was not successful in purchasing the facility, this quest resulted in a partnership with Elmira College where GETA would manage its indoor courts. This initially allowed for use of the College’s 4 indoor courts but with some serious limitations: no tennis Monday – Friday after 3:00pm and no weekend tennis after February. In addition, the lighting at the College’s courts was poor. Some players chose to drive to Ithaca to play on weeknights; others stopped playing.

Prior to the start of its second year of partnership, with the contribution of GETA’s first year payments and a sizable financial donation from a local player, the College added new LED lighting for a huge improvement! In 2019, the expected continuation of a revenue stream to the College allowed it to invest in improvements to the tennis courts, including a repainting of the surface and walls and new screens. In the summer of 2019, the College chose to end its collegiate tennis teams, opening up the hours and dates available to the community! Play was extended Monday-Friday to 9:00pm and the indoor season extended its weekend play through May. With the opening up of evening hours, in 2019 through the help of several volunteers, GETA added Friday Night and Saturday Evening Doubles Mixers open to the general public. GETA’s innovation of adding online booking allowed players with seasonal commitments to book additional playing time up to a week in advance.

Many volunteers have helped over time to promote tennis and GETA’s mission. There was, and is still, a passion for the sport that unites us and drives us to grow tennis, support it, and benefit from all it gives back! 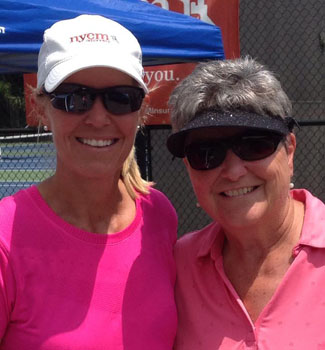 Jennifer Haack with one of GETA’s founders, Mary Ellen Halm 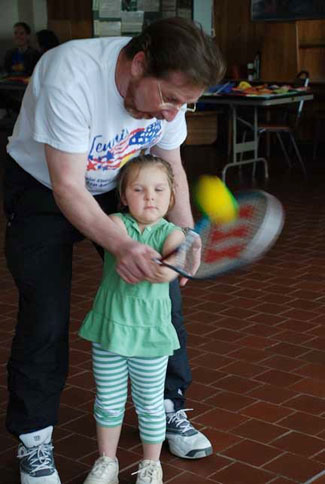