Get to the Ball Quicker

Would your game improve if you had more time to hit your own shot? How would you like to get to your opponent’s shots more quickly? We believe that the answer to both of these questions is a resounding YES!

Many recreational players wait too long to determine where their opponent’s shot is going before they start their own movement for their shot. Most wait till the ball has crossed over the net before they make their first move. Some players don’t move at all thinking that the shot is going to land out. In a baseline rally, waiting till the ball has crossed the net cuts down the amount of time you must prepare to hit your own shot by half.

With the speed and power of the professional game, world class tennis players react within fractions of a second before and after their opponent hits to stay in the point and have the chance to hit an aggressive shot of their own. To do this, they need to cut down on their own reaction time. One way to do this is to react and begin moving when the ball is being contacted on your opponent’s strings. This not only works with ground strokes but with returns of serve, volleys, and other strokes. The split step is a very important start to making this happen. Professionals execute the split step a fraction of a second before their opponent contacts the ball. The split step is the act of “de-weighting” yourself by hopping slightly off the ground and separating your feet prior to landing back on the court. This provides you with a solid base to make your next move toward the oncoming shot. While the split step can be very exhausting and often forgotten, once you make this part of your shot preparation, you should find that you are less rushed, more engaged, and better prepared to execute your own stroke.

Give this a try in practice and see if it makes a difference…you will be amazed at how much better prepared you are. 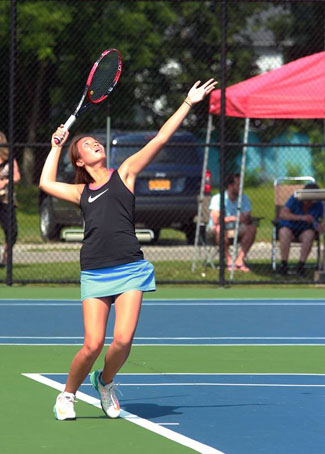